Answering the cults (and difficult people in general) the way Jesus did! 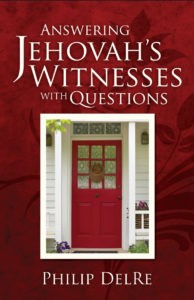 What did Jesus do when the false teachers tried to trap Him? Jesus, He never argued doctrine. All He had to do was ask the right question, and it shut their mouths every time. Can anyone improve upon the methods Jesus used? When you do God’s work God’s way, you get God’s results!

One thing that all cults and non-Christian religions have in common is, they all deny the deity of Christ. In John 8:24 Jesus said, “Unless you believe that I am (the name God said was His in Exodus 3:15) you will die in your sin.”

People reading this today (2,000 years later) might not understand this, but the people Jesus said it to understood Him perfectly! They wanted to stone Him for claiming to be God (John 10:30-33). In most cases, the confusion is based on miss-understanding the Trinity.

The cults say the Trinity is a damnable heresy. For a mortal who has never seen God, to say that the omnipotent, omniscient, omnipresent, immortal God cannot be God in heaven, come to earth as a man, and be everywhere at the same time by His Spirit (a statement beyond his pay-grade) is a greater mystery than the Trinity itself.

There is not a man on earth who can tell you how a brown cow can eat green grass and turn it into white milk!

For more on the Trinity see our article, How can one God be a Trinity?

Questions Can Be More Powerful Than Answers!

“Rather than shower his listeners with information, Jesus used questions to draw answers out of them. A person can close his ears to facts he doesn’t want to hear, but if a pointed question causes him to form the answer in his own mind, he cannot escape the conclusion, because it’s a conclusion that he reached himself.”

Our goal in presenting this material is not to teach you how to win an argument, but how to win a soul.

Like most Christians, I used to hate when the Jehovah’s Witnesses would come to my door, for one good reason and one bad reason. The good reason I hated it was because I knew they were involved in a cult and were so deeply deceived they seemed utterly un-teachable. The bad reason was, I did not know what to say to shake them out of their deception. It always ended with me getting frustrated, and them walking away feeling as if they defeated me. What would Jesus do? Jesus would do the same thing He did with the Pharisees. Rather than argue doctrine, Jesus would simply ask the right questions.

If you will take the time to learn just a few simple questions, you never have to fear the Jehovah’s Witnesses coming to your door again. In fact, you’ll look forward to it!  The right question, offered in gentleness and love just may help them discover the truth about who Jesus really is. And, in less than five minutes, they will walk away with the seed of liberating truth planted in their minds and hearts!

I will never forget when I heard a former Jehovah’s Witness on the radio explain how he knocked on doors for six years, and not once in six years did he meet a Christian who could refute his errors using a Bible! He mentioned how at the end of the day he would meet up with his other Jehovah’s Witnesses, and they would compare notes. They amused each other because each of them had his own count of how Christians they “defeated.” They would say, “I defeated three Baptists, two Methodists, three Presbyterians, and a Pentecostal!”

The fact is (as the late Dr. Walter Martin used to say),

The average Jehovah’s Witness can twist the average Christian into a theological pretzel in less than a minute!

Hallelujah. That need not be the case any longer. Virtually every time I talk to them, in ten minutes or less,  they walk away frustrated, and I’m asking them to stay because I have more questions!

The Cultist at my Door

The Jehovah’s Witnesses came to my door and introduced themselves as people from the Watchtower Society. My first words were,

“Great, I do have some questions about the Bible. Maybe you can help me. Would you like to come in?”

The lady got all excited and waved to her husband to come in. As they were entering, I said to my wife,

“Honey, the Jehovah’s Witnesses are here, can you put on some tea?”

The lady sat down in front of me, and her husband Harold sat next to me. The first thing she said was,

“Did you know that Jesus was actually the Archangel Michael?”

At this point, I got excited and said,

“Really? Wait a minute. Let me get my Bible!”

I came back already, I sat down and said,

“Now, where does it say that in the Bible?”

A little disappointed and in a slightly apologetic tone, she said,

“Well, it doesn’t actually say that in the Bible.”

Now I expressed disappointment, and with a shrug, said,

“Aww… how would you know that then?”

“That’s what they told us at the Watchtower.”

The ultimate proof that Jesus was not an angel is found in (Hebrews 1:6).

“How would they know that?”

She wasn’t sure. Then, I took the initiative, and with the innocence of a child began to dismantle her “theology” by simply asking a few simple questions. I said,

“I’ve always been curious about John 1:1. How does read in your version?”

She opened to the passage in the mistranslation they use and read,

FYI:  That little definite article “a” (for the Word was “a” God) is not in the Bible! And if it was, that would make Christianity a polythiestic religion! So here is how you help the witness with question number two:

Me: “Was Jesus a true God, or was he a false god?” (I thank Ron Rhodes for this question).

 Me:  “But, you just said Jesus was a true God. How many gods are there?”

JW: “Well, there are many gods. Satan is the god of this world.”

Me:  “But are they true gods or false gods?”

JW:  “There is only one Almighty God, that is Jehovah!”

Me:  “Well, you just said, ‘Jesus was a true god,’ and now you say ‘Jehovah is God.’ Then Jehovah’s Witnesses have more than one god. So, you are polytheists. Right?”

At this point, you have nailed them with questions that they cannot answer. Do not let them off the hook on this issue. Continue pressing like a child would because this is a blatant contradiction. The deity of Christ is the most critical issue in Christianity (See John 8:21-24). They just said there is only one God, and their own Bible just said Jesus was a god, therefore, Jesus must be God! Many of them will walk away in frustration at this point. If they are still there, then, you can ask with gentleness:

Me:  “This sounds a little confusing to me.”  I looked at her husband and asked, “Does this sound confusing to you?” No answer.

As long as you are asking the questions, you are in complete control of the situation. The J.W. will try and go to another subject, but you must be gently insistent on getting the Witness to see that he is not being honest with you, with himself, with the text, or with God! Ask again, gently,

This is How the Rest of our Conversation went….

Me: “Well if Jesus wasn’t God then who was He?”

Me:  “That reminds me of King David. Do you know how many brothers David had?”

Me: “Do you know where he fit in the birth order?”

JW:  “I believe he was the youngest!”

Me:  “Then how is it that Psalm 89 says David was the firstborn of many brothers if he was born last?”

Me: “The answer is, the word “firstborn” was also used as a Hebrew idiom meaning pre-eminent. Now we can go back to Col. 1:15 with the correct understanding.”

Me:  “This verses actually says, Jesus is the physical manifestation of God, and Jesus created all things!”

Me: “What happened to Jesus after He was crucified?”

JW:  “He was raised a spirit creature.”

Me:  “You mean he was not raised physically; he was like a ghost?”

Me: “Remember when Jesus said, ‘Destroy this temple, and in three days I will raise it up?’” “It says, ‘He was speaking of the temple of His body (John 2:21)?’” Do you know what the Greek word is that they translated body?”

Me:  “The word is soma. Do you know what soma means? (The JW said,  “No.” ) It means physical body! How do you explain your teaching that Jesus did not rise from the dead physically when Jesus Himself said He did?”

Me:  “Do spirits have flesh and bones and do they eat fish?”

Me:  “Then how is it that at the end of Luke (after the resurrection) when the disciples saw Jesus, it says they were terrified and thought they saw a ghost, and Jesus said to them,

“Look at my hands and my feet, touch me, and see; for a spirit does not have flesh and bones, as you see that I have.”

And He ate a piece of a broiled fish? How then can you say He was a spirit creature? Isn’t this the same mistake the disciples were making, when Jesus corrected them?”

At this point, the woman abruptly said,

“But I still have more questions!”

And, like a complete wimp, her husband Harold said,

As they were walking out I said,

“Can we have your phone number, maybe we can do this again sometime?”

They did leave their phone number, but when we called them, they refused to come back for another “Bible study.”

Many Jehovah’s Witnesses will end the conversation long before you can take them this far. But, before they leave, if possible, please ask them look at Acts 4:12. Then ask,

“Who is the Apostle speaking of in this chapter?”

They have no concept of coming to Jesus for salvation. This way, you will have at least shown them the truth about Jesus, you will have planted the seed of eternal life in their heart. Then pray for their souls. Your hands will at least be clean of their blood.

We have a three-hour seminar on How to Present the Gospel the Way Jesus Did. Contact us if you would like to have us come to your church.